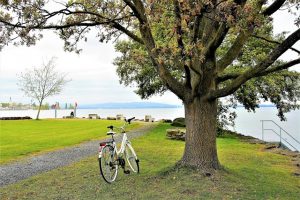 The wonderful new Smith Mountain Lake Community Park opened this past June to the enjoyment of many. Now Jason M. Dunovant of The Smith Mountain Lake Eagle informs us that the next phase of the park’s development has been approved and is ready to begin soon for completion in 2008.

The Franklin County Board of Supervisors approved plans last week to add a public beach and parking area to Smith Mountain Lake Community Park before Memorial Day 2008. With the approval, the county will begin the third and final phase of construction at the new community park.

The board voted 5-1 with one member absent to allow Commerce and Leisure Services director Scott Martin to begin seeking bids to construct the in-water beach as well as seek a grant from the Virginia Outdoors Foundation for $150,000 to go towards future construction at the park. The county currently has $350,000 appropriated in the budget for this fiscal year to be used for construction at the community park.

Martin requested that the final phase of the park be split into two phases with the construction of the beach, parking for 100 vehicles, and upgrades to restrooms being the first phase to be completed by Memorial Day. The cost of the first phase of the phase three construction is estimated at $200,000, well under the amount currently appropriated in the county’s budget. The next phase, according to Martin, will be much more expensive.

“Phase two (of phase three) is where it gets expensive,” Martin said. “It is more than we have funding available.”

The second phase includes a bathhouse with additional restrooms, a concessions building, and a maintenance building. The cost of that phase is estimated at $600,000 but Martin is hoping to lower prices with the help of volunteers much like the ones that helped with earlier phases in the park’s construction. Martin also informed the board that, with the upgrades, the current restroom at the park could likely handle the increase in visitors if they decided not to build the bathhouse in the future.

The Smith Mountain Lake Community Park opened this past June with a large covered fishing pier, picnic shelter, hiking trails, restrooms, and a playground all located on a peninsula near the Park Place subdivision. The park is located directly across the main channel from the Smith Mountain Lake State Park giving visitors a view of an unspoiled shoreline.

“November, when the stripers start schooling up on the main stem of the Roanoke River in this area, it’s gonna be a very, very exciting place to be,” Martin said.

Construction of the beach area will likely begin later this year to assure completion by next summer.