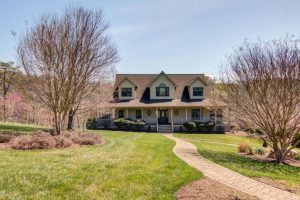 The 2007 Smith Mountain Lake Charity Home Tour is an event that’s unlike any other in our area. Have you ever thought you would like to see what other folks around Smith Mountain Lake have done with the Real Estate they have purchased? And what kind of unique ideas for homes and grounds have been developed to surround our lovely lake? Do you care about those less fortunate than yourself and would like a way to benefit such people? On the Charity Home Tour, you will have the opportunity to do each of those things above, as well as just have a grand time.

On the evening of Friday, Sept. 21st there will be a black tie sort of affair honoring the home owners who allow their property to be toured and the major sponsors who back the event. There will be a veritable feast served, a silent auction, and music and dancing, with  proceeds going to local charities. See website for prices and times as well as specific charities to be given to.

The Tour itself, which provides the opportunity to visit eight beautiful homes, will be on Oct. 5th, 6th, and 7th, and again you may visit the website for more details.

Read the story of how the SML Charity Home Tour began 16 years ago on the next page.

That spark of an idea was gently fanned to form a small planning committee. A short time later, their enthusiasm caught fire and with the help of 300 volunteers the first SML Multiple Sclerosis Home Tour was set to go in the fall of 1991.

Two weeks before the tour, a formal “black-tie” event was held to honor the homeowners and the first sponsors of the tour. The evening included elegant hors d’oeuvres, dancing and an auction.

At the same time, Jeanne was serving on the Board of Trustees of the Blue Ridge Chapter of the National Multiple Sclerosis Society and looking for a fund raising idea.

What about a home tour, she mused. It could have a special twist: you could come by car or boat.

Jeanne recalls those first pre-tour jitters with a smile. “We hoped to raise $10,000, but I really wasn’t sure anybody was going to come,” she reminisced.

That very first year, nearly 1200 people attended the tour and over $49,000 was raised through ticket sales, auction items and sponsorship. The Wagoners not only exceeded their initial expectations, but they lit a fire under a community of volunteers that continues to burn bright, sixteen years later.

Why is this home tour so successful?

There’s no one answer.

The tour itself is always fun. Visitors come to see the sometimes grand, sometimes glorious, sometimes simple, always unusual-unique-interesting lifestyles of the homeowners on the lake. Touring by boat and enjoying the 500 miles of shoreline on the cool lake waters is a special delight. Decorating ideas, remodeling schemes, landscaping techniques and building designs are plentiful and interesting to see.

The price is reasonable. a ticket is good for all three days, one pass through each of the eight homes. And the money really does go to charity.

An organizing force of over 2000 volunteers plan and conduct the tour events. There are no paid employees. Most of the materials used in the production of the tour are donated or heavily discounted.

For six years, all of the money raised by the home tour went to the Blue Ridge Chapter of the National Multiple Sclerosis Society. Then in 1997, the tour organizers at the lake elected their own board of directors to manage the tour’s activities. They selected Jeanne as president of the newly formed Smith Mountain Lake Charity Home Tour, and added two local charities to share in the proceeds. Subsequently, seven local area charities were chosen each year by a committee of clergy to share the tour money with the MS Society.

The charities chosen to share in the proceeds from the tour include organizations to help the hungry, the sick, the challenged, the aged, the homeless, and to offer emergency assistance.

Without a doubt, it’s the worthwhile efforts of these organizations that continue to drive the volunteer force of workers and helps to attract thousands of visitors to the lake each year.

For the past several years, much of the financial success of the Smith Mountain Lake Charity Home Tour has been due to its sponsors.

Based on the amount of their donation, business and individual sponsors receive varying levels of acknowledgment during the home tour promotions. The generosity of these individuals and businesses, many of whom are involved in home decorating, design, building, landscaping or other services used by the homeowners, accounts for more than half of the proceeds shared by the participating charities.

Since that first home opened its doors fourteen years ago, 144 homes around the lake have been on tour, more than 50,000 people have come to see them, and approx. 2.6 million dollars has been raised for the community’s charities.