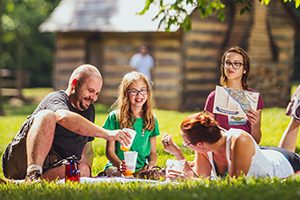 Many early settlers in Virginia migrated to the Roanoke Valley, a 45minute drive from Smith Mountain Lake. On the Blue Ridge Parkway, there is a marvelous park called the Virginia Explore Park, which commemorates those early days of the pioneers. Most of us locals have heard of the Explore Park, but if you are one of those who have not made time to actually take the kids and go for the day, you are missing out on a special experience.

Recently two new exhibits have opened at Virginia’s Explore Park that add to the magic of the historical experience there. These exhibits chronicle the history of the Blue Ridge Parkway and the Roanoke Region.

The visitor’s journey begins when approaching the exhibit gallery at the recreated Blue Ridge Parkway’s Hardy Road bridge underpass that covers the exhibit’s arched entryway. An uncut faux stone outcropping is transformed into a familiar chiseled stone archway, offering a striking example of how the parkway was cut from the earth into these elegant works of art during the years of parkway construction.

The Blue Ridge Parkway Gallery starts with the parkway concept, the original development plans, and public response to the idea, which was introduced in the early 1930s. Through seldom-seen images from the National Park Service archives, newspaper clippings, and informative content, the exhibit provides visitors with an overview of the impact of the parkway, both in preservation of natural resources and habitat, as well as its economic and recreational significance to the communities through which it passes. There are sound sticks of popular Blue Ridge music from the era and interesting oral history transcripts from men who helped build the parkway. The modern parkway system, its culture – past and present – and recreational features, natural beauty, and management challenges complete the gallery.

The Roanoke Region Gallery centers on a unified theme of regional transportation. Entitled Pathways to Railways, the gallery emphasizes the region’s significance as a transportation hub and how the paths, rivers, and rails attracted early settlement to the area. It also highlights the region’s natural history, cultural heritage, and growth until the establishment of the railroad in the region in the late 19th century. Conestoga wagon and batteau models are included, as well as a display of replica Indian artifacts.

Modern-day Roanoke is represented in a 30-foot pictorial panorama. Entitled Roanoke Region Today, this wall gives visitors a glimpse of the Roanoke Valley, including many modern-day educational, cultural, leisure activities, and the Valley’s many special places.

The exhibits are the result of a partnership between the National Park Service’s Blue Ridge Parkway, Roanoke County, and Virginia’s Explore Park. Funding for this project has been provided by the Federal Highway Administration (FHWA) and administered by the Virginia Department of Transportation under the Transportation Enhancement Program. Additional support was provided by the County of Roanoke. ExPlus of Dulles, VA, served as exhibit designer; exhibit fabricator was Kearney & Associates of Culpeper, VA, with the assistance of Photoworks Creative Group of Charlottesville, VA.

Exhibits are open from 9 a.m. to 5 p.m. daily until November 18, when the Visitor Center closes for the season. It will re-open spring 2008. For more info. visit http://www.explorepark.org/.