This story was submitted by a reader who fell prey to a careless realtor and a dishonest home inspector; the names of the individuals involved have been changed for their privacy.

A secret room is the stuff of dreams for many people. Childhoods were built upon imagining that somehow, you would stumble upon a secret room that your parents never told you about, and oh, what fun you’d have! But what if you actually did find one – in your newly bought home? Even worse, what if that secret room, a room that you had hoped would fulfill your childhood fantasies as you cracked open its door, turned out to be a nightmare of a problems as well as a health hazard? For two new homeowners, this nightmare came true.

Troy and Ellie* were a couple in the market for a new home. Itching to take advantage of the 2009 tax break, they found a seemingly normal home that they thought would be a domestic paradise for them and their children. A huge upgrade from their cramped apartment with just three rooms, they were ecstatic when their offer, which came in 20k lower than the listed price, was accepted instantly. It seemed like everything was going great, contrary to the naysayers who intoned that a cheap first home would be full of problems.

The home inspection did turn up a few issues, but the new homeowners weren’t fazed. They offered a sum to make the necessary repairs, and after checking with the home inspector, who confirmed their budget would cover the repairs, they closed on the contract and began moving in. The house seemed to be perfect for them, and with all of the work of getting settled, redirecting mail, and preparing to enjoy their new home, they didn’t get the chance to take much of a look around.

But about a month later, as they were down in the basement one night, the facade started to crumble. They were down in the laundry room, when Ellie noticed something under the bottom of the stairs leading down into the basement. She went over to check it out, and found a tiny hook and eye latch. Undoing the latch and pushing hard against the wall, they discovered that it was actually a disguised door – a secret room! 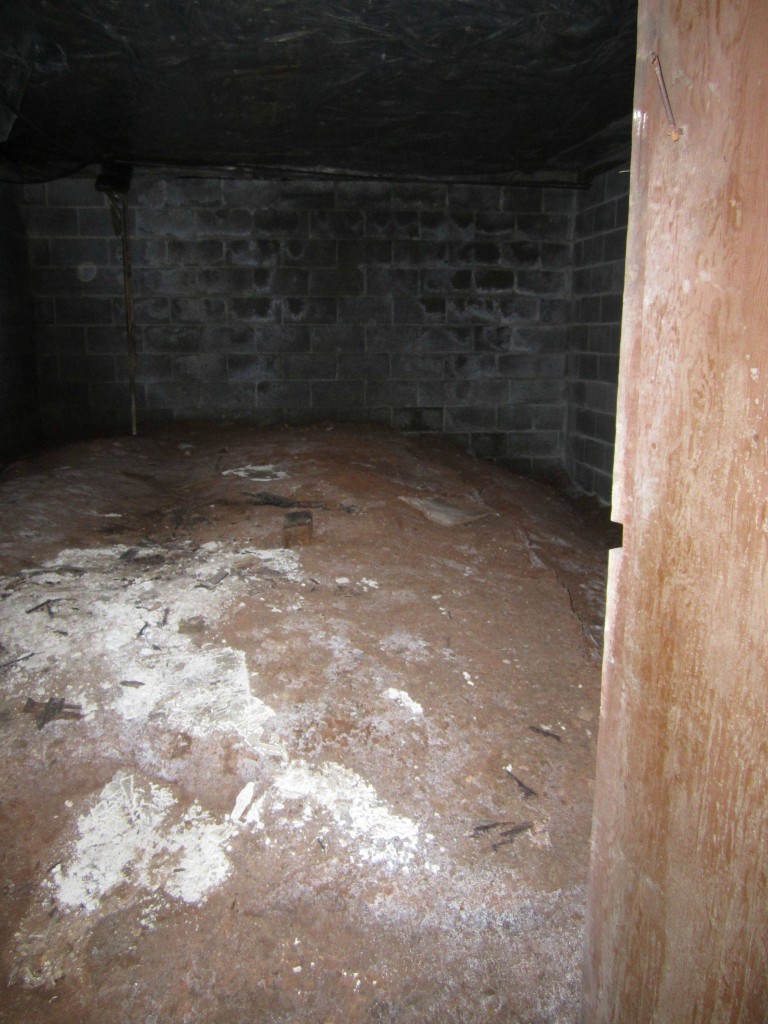 However, their excitement quickly died out as they looked inside. As it turned out, the room had been used for trash and construction debris, which had grown immense amounts of billowy white mold. Pipes that led to unknown areas of the house hung down from the ceiling at dangerous angles, threatening to break free. 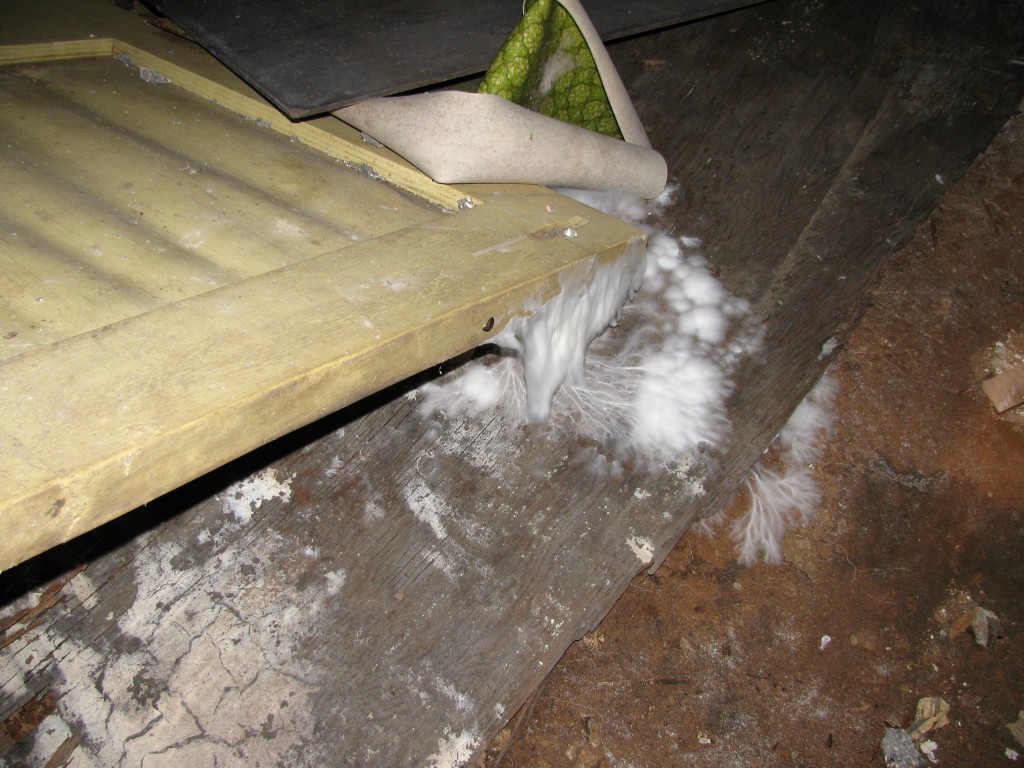 Some of the debris thrown in the room – old nails, a door, and a disintegrating push lawn mower (the black object partially buried)

Troy and Ellie, upset by this discovery, called up their realtor, who denied knowledge of the room and put the blame on the home inspector. Troy then contacted the inspector, describing the issue to him, and was told that the inspector would return as soon as possible. A couple of weeks later, the inspector showed up and glanced over the room, confirmed it was mold, and casually mentioned that the couple should, “put on dust masks and Clorox the h*ll out of the place”. With that, he left, leaving the couple completely at a loss of how to conquer the room. 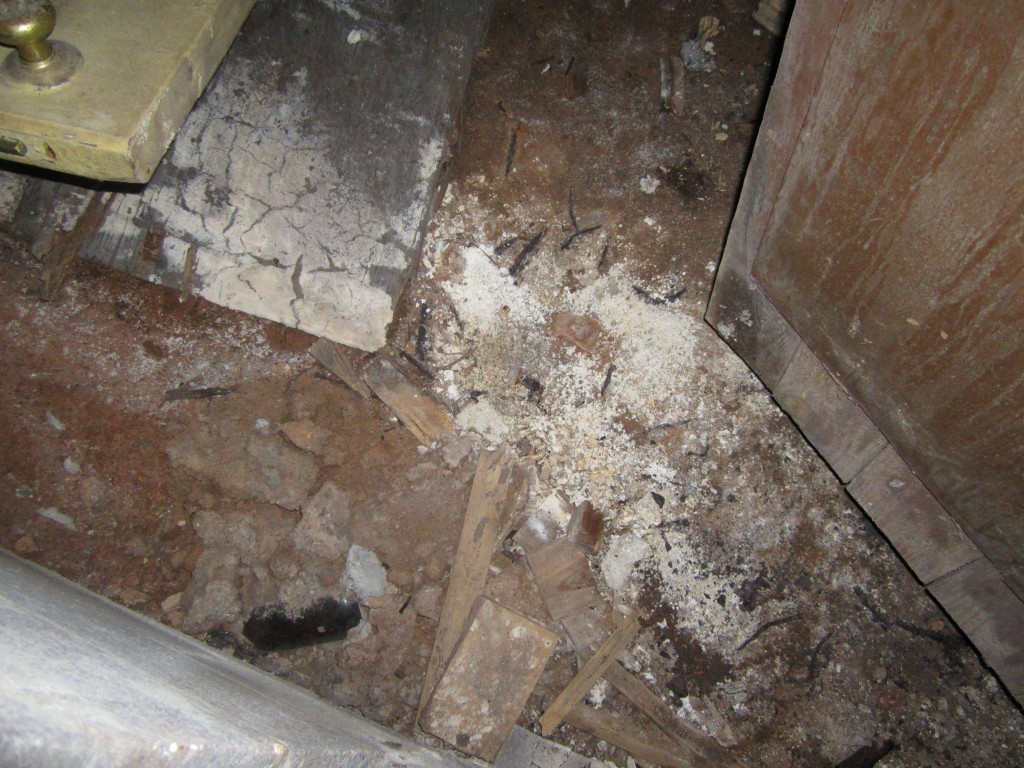 A door covered in mold and other debris

For Troy and Ellie, it was a long uphill battle afterwards. Many other cover ups were discovered around the home, from finding that the wall molding was stuck on with double sided tape, to the discovery that the drainage pipe had been disconnected from the main bathtub – which led to bathwater simply draining straight into the room below. Further investigation revealed that the home inspector had a reputation for being lax, overlooking problems with homes in order to close more sales and acquire more jobs.

Thankfully, stories such as this are quite uncommon. Prospective home buyers can learn a lot from this, though. Buying a home is not something that should be rushed. Take time to thoroughly research the individuals involved in your home buying process; check online for reviews of the realtors and the home inspector. You may also want to consider hiring an independent contractor or engineer to look over the home as well, as they tend to be unbiased and more stringent in their observations.