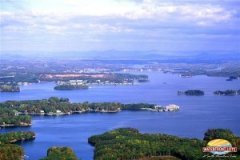 Some of you reading this  already know many of the facts about  Smith Mountain Lake, but many of you may not. So I thought it would be fun to present a broad brush version of the lake as a whole. Here are some Smith Mountain Lake Fun Facts.

Smith Mountain Lake was formed in the 1960s as a power generation project of Appalachian Power, part of American Electric Power (AEP). It is the result of a 235-foot tall dam in a gap of Smith Mountain on the Roanoke River channel in Pittsylvania County.

The main channels of the lake total about 40 miles along the basins of two main rivers, the Roanoke and the Blackwater, which join a few miles west of the dam and flow together to form the widest part of the lake. The Roanoke River channel flows south-southeast from the city of Roanoke to the lake, and it generally provides a border between Franklin County on the southwest and Bedford County on the northeast shore. The Blackwater River Channel generally flows west to east through Franklin County until it joins the Roanoke River Channel near the Pittsylvania County border. At the point where the main channels join, the combined main channel flows east to the dam and provides a border between Bedford County on the north and Pittsylvania County on the south shore.

In addition to the two main channels, there are numerous other tributaries that were backed up as a result of the dam at Smith Mountain. Since the dam provided a water level at 795 feet above sea level along all of these creeks and stream basins, several creeks are as broad in places as parts of the main channel itself.

Those familiar with the lake throw around the names of tributaries as though they are talking about separate entities from the lake. Comments such as try out that Marina on the east side of Craddock Creek or the striper bass are really running near the mouth of Bettys Creek may seem confusing to newcomers, but youll quickly become accustomed to the local lingo. Some of the main tributaries in Bedford County are Witcher Creek, Hatcher Creek and Craddock Creek. Major tributaries in Franklin County include Bull Run, Bettys Creek, Beckys Creek, Gills Creek, Lynville Creek and several more.

Navigation
One of the many wonderful features of Smith Mountain Lake is the numbered navigation channel marker system on both the main channels and the tributaries. The Roanoke Channel numbers start at R1 near the dam and extend west, then north/northwest, toward Roanoke, ending with R80 near the Hardy Bridge. The Blackwater Channel and all other marked channels are numbered starting at the point where they join the main channel and work up from there. C1, for example, would be the first marker where Craddock Creek joins the Roanoke Channel near the chain of three islands northwest of the dam. As boaters proceed up through the C series, they would be progressing north on Craddock Creek to its end at C8 near Mariners Landing.

Not only are the channel markers numbered, but they are color-coded and lighted for navigational ease. Red and green lights guide a boater through the center of the channel on a dark night, and the numbers make it easy to stay on course by day. With a map in hand, this system makes Smith Mountain Lake a prime place to fish by day or night year-round. I have taken many clients and friends out to dinner by boat and returned home with relative ease late at night. My wife and I enjoyed the full moon rising over Smith Mountain by boat before midnight on her birthday last August 3rd. It would have been challenging making this beautiful memory without the wonderful navigational marker system. A handheld or boat-mounted GPS system also works great here, showing the details of channels, coves and inlets across our vast mountain lake.

Shoreline
Though Smith Mountain Lake has only about 40 miles of main river channels, it boasts an impressive 500+ miles of total shoreline. This figure is staggering as one considers that this is the approximate highway distance from here to New York City! This shoreline figure is a testimony to the many large tributaries that flow into the lake as well as the lovely, rolling nature of the Blue Ridge Mountain terrain that makes up Smith Mountain Lakes borders. This terrain gives Smith Mountain Lake many hundreds of coves, inlets, twists and turns that make for breathtaking views, marvelous home sites, and practically unlimited spots to anchor a boat for a picnic lunch, swim, watch a romantic sunset, or catch a double-digit weight striped bass.

Islands
In addition to its many coves and inlets, the rolling Blue Ridge Mountain terrain has provided Smith Mountain Lake with many lovely islands. These islands are formed from old mountain tops or ridge lines. A few of these islands are privately owned but most are available for the publics enjoyment. Boaters regularly anchor their crafts offshore, providing a place for kids to wade in the sand and swim. Some stop for a picnic lunch or explore the trails. Many people have found great fishing holes off island shores.