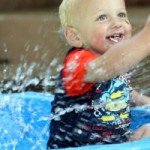 It is now officially summer, school is out and Smith Mountain Lake is literally swimming with fun in the sun. Most of the plans we look forward to making for summer vacations and weekends off during warm months, involve some exposure to the sun. What would the world be like if we had to stay indoors all the time and not have have any contact with the suns rays. Sounds horrible right? The sun is obviously a good and important part of God’s design for the cycle of life.

However, mankind in it’s greed, has damaged the ozone layer, a layer of the atmosphere that was meant to protect us from damaging exposure to the sun’s ultraviolet rays. Free radical chemical catalysts released through use of aerosols, vehicle exhaust, etc. have caused a depletion in the ozone layer. Wikipedia says this:

Chemical compounds capable of surviving the rise to the stratosphere, where Cl and Br radicals are liberated by the action of ultraviolet light. Each radical is then free to initiate and catalyze a chain reaction capable of breaking down over 100,000 ozone molecules. Ozone levels, over the northern hemisphere, have been dropping by 4% per decade. Over approximately 5% of the Earth’s surface, around the north and south poles, much larger (but seasonal) declines have been seen; these are called ozone holes.

In recent years, the incidence and severity of sunburn has increased worldwide, especially in the southern hemisphere, because of damage to the ozone layer. Ozone depletion and the seasonal ozone hole has led to dangerously high levels of UV radiation. Incidence of skin cancer in Queensland, Australia has risen to 75 percent among those over 64 years of age by about 1990, presumably due to thinning of the ozone layer.

Now the question for we who live with a greater risk of damage from the UV rays, is how much sun is healthy, and how much is dangerous? If we engage in careful, sensible sun exposure, we can still enjoy the positive effects of the sun.

According to the experts It is difficult to determine exactly how much sun exposure is healthy for everyone, because the amount of sun needed for a person to synthesize enough vitamin D varies from person to person. Damage or good is done according to the season, the latitude (closeness to the sun), time of day and skin coloring. Each of these things affect the amount of UV that reaches and is absorbed by a persons skin.

For the majority of people 15 minutes of sun exposure on the arms and legs two to four times a week may be enough to maintain vitamin D levels. Above all, do not allow your skin to get even the slightest burn. Wear protective clothing, hats, healthy sunscreen (which will be covered in the next segment), and limit your time outdoors in the middle of the day. With sun exposure, moderation is key; too much UV exposure and sunburns increase the risk of skin cancer.