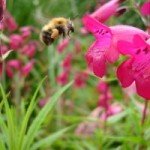 At Smith Mountain Lake you will find an abundance of beautiful and beneficial insects. What many people don’t know is that the bumblebee is one of the most amazing of those insects.

In 1943, the French entomologist August Magnan argued that, according to the known laws of physics, the bumblebee shouldn’t be able to fly. He stated:

“Virtually all insects flap their wings through a wide arc, about 165 degrees. Frequency generally varies with size: The larger the insect, the slower the wings beat. Mosquitoes, for example, beat their wings about 400 times per second, fruit flies about 200. Birds beat their wings much more slowly-about 50 times per second for hummingbirds. But bees, which are 80 times as large as fruit flies, flap their wings 230 times per second through an arc of about 90 degrees. And although most insects produce the majority of lift about halfway through the stroke, when the wing is moving fastest, bees get an equally large contribution at the beginning and end of the stroke from the rotation of the wing.”

Someone forgot to tell the bee there was a “flaw” in God’s design. But every day, the impossible happens and bumblebees fly. In fact, impossible is one of God’s favorite words. Consider the following “impossible” events: Moses parts the Red Sea enabling the Israelites to cross on dry land, the sun stood still in the sky while Joshua fought his enemies, a virgin conceived and gave birth, five loaves and two fish fed over 5,000 people, Peter walked on water, Jesus rose from the dead, and bumblebees fly.

As part of our human condition, we constantly deal with issues of what is possible and what is not. But, we need to remember that we do not journey alone and that God is with us if we have chosen to follow Him. So, today, if you are facing something that seems overwhelming and impossible, keep in mind that, miracles happen every day and NOTHING IS IMPOSSIBLE WITH GOD!